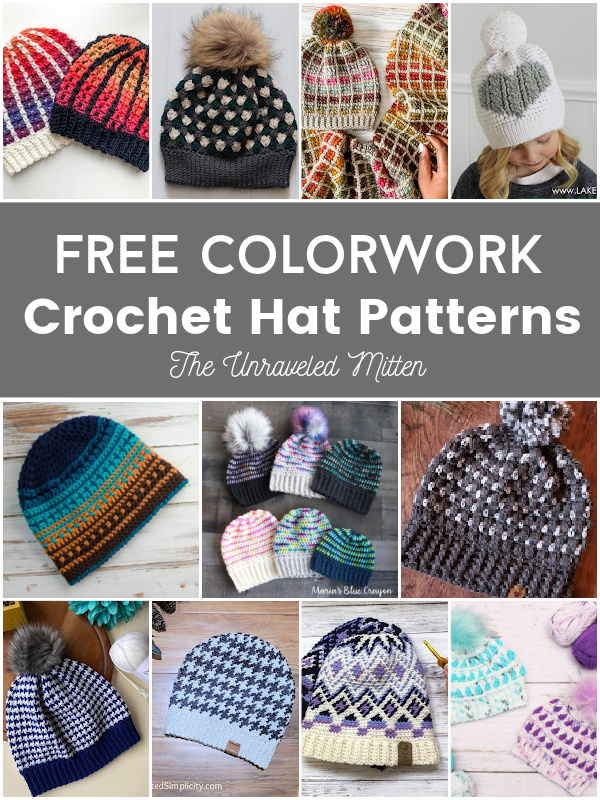 When I was choosing hats for this list, I picked out patterns where color changes were essential to how the hat turned out. Anyone can add stripes to a hat, but the colorwork on these hats is an integral part of the pattern.

First on my list are some mosaic crochet hats. Mosaic crochet is a fun way to do colorwork because you only every use one color per round/row. Stitches are skipped and filled in with the next color to create fun designs in your crochet.

This reminds me of a sunset!

This fun mosaic design features a chevron pattern with only a 3-row repeat.

Did you know you could do mosaic crochet in plaid?? This is one of my favorite hat designs to date.

Tapestry or Fair Isle crochet features designs where you carry your yarn either through or float it along the back of your work. Intarsia is worked in blocks where each color is attached to its own bobbin.

This is such a classic pattern.

I think the crochet cable heart on this hat is so unique. Perfect for Valentine’s day.

Tunisian crochet hats are worked flat and seamed together at the end.

This hat even has a matching scarf. Make your color changes easy by using a self-striping yarn.

Practice your Tunisian knit stitch on this Valentine’s Day hat.

Some crochet stitches really shine when they are worked in more than 1 color.

9. Yuba Beanie by The Unraveled Mitten

This colorful hat uses simple stitches to create this stunner. This is a hat I know my husband would love to wear.

This basic hat pattern is dressed up with stripes of variegated yarn. The options are endless!

Another houndstooth pattern! This one is made by alternating different stitches rather than fair isle.

Shell stitches are nested in each other to create this attractive beanie.

14. Peek a Boo Beanie by Loops and Love Crochet

I originally thought this was popcorn stitches peeking through but they are not!

I hope these crochet hats have left you feeling inspired! Have you made any of these already? Which one is your favorite?

Hello! My name is Heather, and I'm a crochet-obsessed, coffee-loving, happily married, busy homeschool mom of 3 girls. Here you'll find a bunch of helpful crochet tutorials and all the patterns I've designed. Let's make something!

The Unraveled Mitten is a participant in the Amazon Services LLC Associates Program, an affiliate advertising program designed to provide a means for sites to earn advertising fees by advertising and linking to Amazon.